A bit of History

The Polish Folklore Ensemble “Tatry” of Adelaide, South Australia has been in existence since 1958. It is one of the oldest ensembles in Australia. It was founded by Michal Mordvinow.

It is composed of two groups – ‘Małe Tatry’ (Juniors) and the senior group made up of young adults; mainly students. The ensemble has countless performances to its credit, of these over a hundred full concerts of its own. It has participated at every Pol-Art Festival since its inception in Sydney in 1975.

In 1975 and 1979, Tatry produced large-scale outdoor festivals: – The Wedding of Count Potocki with the cooperation of Equestrian Clubs of South Australia. 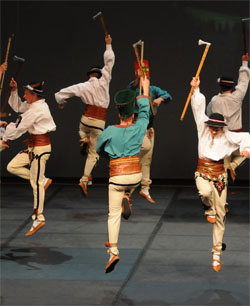 Every year since 1982, Tatry open the Dożynki Festival (Polish Harvest Festival) with songs and dances. The ensemble has performed on most great stages of Australia. It has costumes from virtually every region of Poland, which enables it to have an extensive repertoire. Its members particularly enjoy performing dances from the Polish highlands. The majority of Tatry’s performances successfully combine dancing with singing. It also portrays traditional customs and rituals. This gives opportunity to young Australians of Polish descent and other backgrounds to relive and learn old Polish customs through song and dance.

In the past, the majority of Tatry’s music was arranged by Tadeusz Mikucki, who for many years was the Ensemble’s singing instructor and conductor. He also composed the many songs for the ensemble. One in particular – Kraj Rodzinny Matki Mej (My Mother’s Homeland) has won worldwide recognition among Polish communities. For many years now, it is the official opening song of the International Rzeszów Festival held in Poland every three years.

For many years the Polish Youth Orchestra led by Zygmunt Matusiewicz-Matuszewski accompanied the Ensemble. Sadly he had to resign in 1995 due to ill health.

Tatry is a self-supporting organisation run by a dedicated committee.